I wanted to do a series on a set of demoeffects, inspired by Shader Toy (and Denthor!). The majority of the shader toy effects are either raytraced, or polar/circle-based. So I thought I would begin with polar/circles and work my way from there. Most of the effects are based on a number of "oldschool" democoder tricks that are easy to understand once you have the background knowledge.

I won't be covering the basics behind writing shaders, but I might do so at a later point.

All of iq's shaders are rendered using a pixel shader (or fragment shader in OpenGL talk). The first step is to calculate the position of the pixel on the screen (or canvas in case of WebGL) normalised from -1 to 1. In a picture this is: 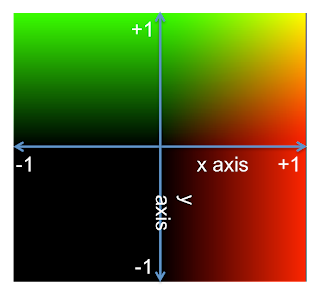 To visualise this in the shader we could write:

We can use the cartesian equation of a circle to generate a gradient of circles.

Again, to visualise this in the shader we could write:


If we want to generate concentric circles we could set a boolean value on or off depending on a modulo operation. If we take the modulo of a value and then test whether it is above half-way then we can generate an on-off pulse. For example, if we get a value ranging from 0 to 1, module 0.1, we can generate a on/off pulse by testing if it is greater than 0.05. 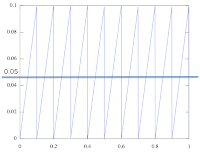 In shader code this would be:


This is a bit long-handed, we can shorten this by directly setting the toggle value, and using the dot product to perform the square operations.
ie:


Great! Now we have all the background knowledge we need to make our first interesting effect. This will be based on the XOR operation:

Wonderfull! Now if we add in the XOR truth table:

And we get a wonderful overlapping pattern.

Add in a bit of animation and we have our first demoeffect! Click the button below in a WebGL enabled browser (Firefox, Chrome, Safari). (view source for full code)

Great article! I've been wondering how these demoscene effects work.

One question -- because the vertex positions X, Y coords already range from -1 to 1, you can get the same effect and skip the resolution calculations by just stuffing the aVertexLocation.xy into a varying vec variable in the vertex shader and pulling it out again in the fragment shader. Is there any negative to doing it that way?

Sure you could certainly do that, the only negative is that sometimes you do want to know your resolution (for example when doing raytracing based effects)

Thanks, makes sense. So it's not strictly necessary for this example, but it's useful boilerplate code for demos anyway.

BTW, works nicely in IE11 too

very nicely explained !!
i did some tweaking and made this
https://www.shadertoy.com/view/lsSXDD

Was inspired by this article to colorize and minify; ended up with this: