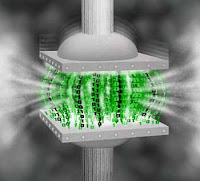 These compressors use a standard compression algorithm but also transform the input to a more compressible format. The most common transform algorithm is the Burros Wheeler Transform (BWT), this attempts to re-order data so that similar codes are close to each other - increasing the ability for the data to be compressed.

Recently, both kkrunchy and Crinkler were described in detail. The author of kkrunchy Fabian "ryg" Giesen wrote a great blog post describing how kkrunchy works. Since kkrunchy works with larger file sizes some more intelligent tricks can be applied. Alexandre Mutel decomposed the Crinkler compressor in his blog post and posted some fabulous pictures of before-vs-after entropy of a compressed executable. Unfortunately, both of these programs are targeted at Windows PE files, and so don't work for other platforms (See here, here, here and here for tips on PE).

The usual approach to exe compression on linux/osx is just to do the modern-day version of com/cab dropping and compress your program with gzip and have a script extract and execute the program. This lacks a bit of flare, but works. Articles describing elf and mach-o are available by Brian Raiter and Amit Singh respectively, but unfortunately they are a little out of date.

A few tools have been written for linux and osx including the byte-optimized linker (x86/64) and obj stripping for linux, and iPakk and muncho for OSX (again, a bit dated). An older elf stripper is also around, and Timo Wiren gives a good overview too. Unfortunately, a similar page on OSX is no longer available online (maybe one day). All in all, I've still found your best bet on a platform other than Windows is just to follow Timo Wiren's first step of advice and do a simple dropper:

Nice overview with a lot of very interesting links, awesome!