Robotics is typically associated with manufacturing robotics (e.g. PUMA arm), military robotics (e.g. Predator UAV), and more recently consumer robots (e.g. Roomba), medical/healthcare (e.g. Da Vinci) and the automotive industry (e.g. driverless cars). Not many are aware of the prevalence of robotics in the mining industry and the steps the industry has taken towards automation and autonomous robots.

The mining industry is a world-leader in autonomy, for example Rio Tinto's Western Australia operations has the worlds largest fleet of autonomous vehicles (150 autonomous trucks) - significantly larger than any operational system in the military. Rio's Western Australia operations are all controlled from a operation centre, which controls 40 mines, 30 pits, trains, power stations, and ports all based thousands of kilometres away. In terms of data, the WA system generates around 2.4 terabytes per minute of data. There is quite a lot of intelligence and innovation involved.

Overall, mining can be broadly broken up into a few key phases:
At each of these steps some kind of machine is involved, and I'll give you a brief overview of the machines and some of the relevant research or commercial automation systems available.

Exploration and remote sensing is a massive research area in itself in other industries, and mining is no different. UAV's are seeing use in aerial surveys on mine sites, with large data sets fusing visual (photogramatery), infrared, LIDAR, InSAR, gradiometry, seismic and other geodesic measurements. On the ground new sensor fusion systems are being developed to classify the mine and ore structure and to identify the richest ore deposits. Combining all this data into an overall mine model is a difficult machine learning task. The Rio Tinto Center for Mine Automation are doing active research in this field, and the Gatewing X100 is an example of an UAV used for mapping in mining.

Drill and blasting is a mining-specific operation and there has been significant advancement in robotics in this area due to the operational hazards involved with this line of work. Robots can accurately drill holes that won't collapse and are easy to load, and Atlas CopCo and Flanders both have commercial automation systems for drilling which are well on their way to delivering autonomous drill rigs in the near future (trial drilling systems have been in use on production sites since 2008). Atlas Copco first started their work in automated drill rigs in the 1980's and now has over 2,500 machines running their control system technology.

The load and haul stage is perhaps the most interesting as it is the first area where autonomous vehicles are used in regular production environments. Whilst autonomous loading is still an area of research (See these CSIRO projects on dragline and shovel loading automation), there are plenty of commercial automation systems for haul vehicles.

Continuous miners and long wall mining have seen multiple automation systems including commercial systems from Eickhoff and CAT. Excavators are no stranger to automation, CMU automated excavators and truck dumping back in the late 90's, and work is ongoing at PWRI in Japan and Hyundai research. The range of commercially available autonomous mining vehicles put military UGV's and automotive companies to shame.


Processing plants have been fully automated, although for many metals, (e.g. iron ore), there isn't much too the process in the first place. Companies such as Metso have fully automated crushers, conveyors, and also include computer vision systems to identify and classify rocks/froth/bubbles, etc. FLSmidth and Calibre Transmin have developed automation systems for rock breakers are available allowing the rockbreaker to automatically park and deploy. In-Pit Crushing and Conveying (IPCC) systems allow parts of the plant to be mobile, and even these systems have been largely automated by companies such as Sandvik.

Transporting material from the mine is usually performed by a train, and autonomous trains have been around for a while. In fact, LKAB have been running driverless trains since the 1970's. The main difference in modern mining applications being that the goal is now fully autonomous operation, and that the trains can stretch many kilometres in length, making control a more difficult problem. Major miners such as Rio Tinto are automating the trains in Western Australia, with companies such as Ansaldo STS and New York Air Brakes providing the technology.

Finally, with stockpiling Stacker-Reclaimers have been automated, with companies such as ThyssenKrupp and iSAM leading the way


Overall there are a large amount of automated and autonomous mining equipment available, and projects such as Rio Tinto's mine of the future at West Angelas and Yandicoogina sites, Vale's Carajas Serra Sul S11D site and Nautilus's Solwara underwater mining are all pushing towards fully autonomous sites where we may see no humans involved in operating future mine sites. 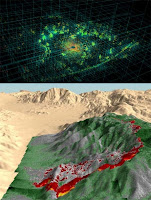 So if you want to find out more about robotics and automation research in mining there are a few great places to start:
The future of mining is autonomous robots, and we are well on our way!
Posted by Adrian at 11:01 PM 1 comment: