Not one to be left behind by nVidias news, AMD/ATI have released the AMD OpenCL beta v4 which now supports OpenCL for AMD GPU's! Some highlights:

Fabulous news! Now you can do OpenCL on OSX, Windows (32&64bit), for nVidia and ATI GPU's and AMD CPU's. It doesn't get any better than this, well, at least util next year when Intel enters the fray.

It's not all good news though, it seems some of AMD's GPUs don't support double precision: 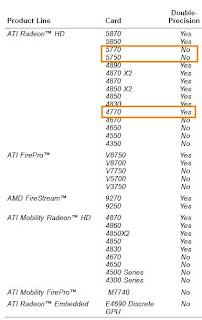 Still, it's better than nVidias lot, and I'm happy to see AMD finally making a serious effort in this space. (Not that the previous efforts weren't impresive, just not so focused...)

nVidia has also released the new version of CG, v 2.2. I wonder how much OpenCL will replace the use of Cg..
Posted by Adrian at 5:22 PM