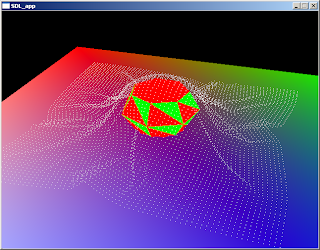 Bullet has basically designed the softbody system as completely separate from the rigid body system, so this makes it a great system to abstract since it will make it possible to implement a softbody system that does not directly rely on the underlying physisc engine, bringing softbodies to ODE, Newton, and friends that do not have it yet. Same plan is for the SPH fluid code I've written, but those are both still on the TODO list to integrate to PAL.

Of course, the remaining issue is how to generate the tetrahedral descriptions.

And during my googling I came across SLFFEA an open source finite element analysis tool. Cool!
Posted by Adrian at 12:30 PM