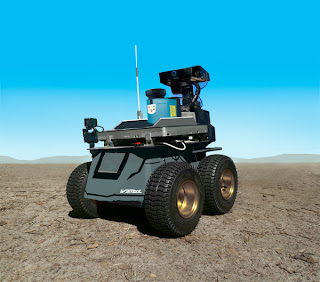 Fantastic news, the team I put together for the DSTO MAGIC 2010 competition has been pre-selected into the top 10 teams, and won $50,000 USD in seed funding! Now we just need to make it past phase 2, and then take away the million dollar prize!

Our team consists of two parts, Edith Cowan University, School of Computer and Security Science, and the University of Western Australia, School of Electrical, Electronic and Computer Engineering which make up the WA team that I am coordinating, and Flinders University in Adelaide that David is coordinating.

The competition is quite tough, were up against a number of veterans from the DARPA grand challenge. This was a series of events where robot cars raced through the Mojave Desert, and then navigated through an urban environment. There is a pretty good PBS/NOVA documentary on the original challenge The Great Robot Race. I was involved on the sidelines with the Urban challenge with the TUM/UniBW/Karlsruhe AnnieWAY entry.

Some of the key competitors include Carnegie Mellon University (Who won the DARPA urban challenge, and came second in the DARPA grand challenge), Virgina Tech (3rd in urban), University of Pennsylvania and Cornell who tied at 5th. You can read about the whole list of competitors on a Dr Dobb's Journal article covering the MAGIC 2010 selection event. Naturally, these teams will be fooled into a sense of complacency and they won't stand a chance against our home-grown team.

We are building 7 robots in WA, and approx 10 robots in SA. You can see the WA robot in the picture with this post, it is based on the Pioneer All-Terrain robotic platform. The WA robots will have DGPS, inertial measurement systems (gyroscopes & accelerometers) for relative positioning, various laser range finders for mapping and collision deteciton, stereo cameras for distance measurement and object recognition and PTZ cameras for object tracking. This should be a very exciting project!

Some of the key areas for software work include building the simulator, developing the computer vision algorithms for object recognition and tracking (including tracking people), the LIDAR data processing, sensor fusion algorithms, SLAM algorithms, the multi-agent team coordination and planning, the data-communications, path planning, trajectory generation, influence mapping, the list goes on!

So if you have any interest in the project, please drop me a line! It's your chance to be famous, and to be part of this history-making event!
Posted by Adrian at 10:06 AM

I'm sure you will do well, as long as someone else handles the controls. :-) Oh, these are automated... no worries then! :-)

:) Thanks Simon. Fortunately there are still human operators involved, but I'll make sure I'm not the one in control ;)