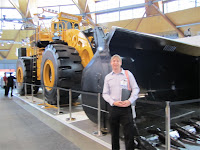 I visited the Asia-Pacific International Mining Exhibition (AIMEX), held every four years. There was a lot of interesting technology on display, with a strong presence of simulators, drills and long-wall gear. Being mining, a lot of very large machines were on display, and the exhibition hall was huge. Automation also had a small presence.

Atlas-Copco had a set of their autonomous drill rig simulators on display, and I managed to get a chance to go through the process. Drilling is a non-trivial task, and it takes at least two weeks for an operator to familiarize themselves with the process. The autonomous drill system certainly makes it easier to operate the equipment, but the drill holes still have to be lined up manually - arguably the most challenging task.

Eickhoff had a demonstration of their automated long-wall system, that uses the Indurad radar system.

CAT were displaying some of their new autonomous equipment, soon to be installed in
Western Australia at FMG's Solomon mine. CAT is always a slow mover to adopt technology but it is interesting to see how fast this technology is being adopted by the major Australian miners, now including Rio Tinto, BHP, Newcrest and FMG.

Below is a video of the CAT system I captured at AIMEX. Apparently this system actually does realtime path planning and adjustment as opposed to following a pre-programmed path like other (Sandvik) systems.


You can watch some more videos of autonomous mine vehicles on youtube: