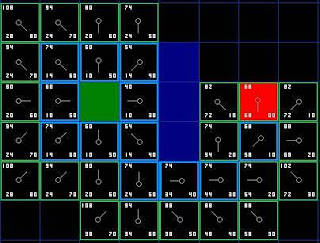 Previously I wrote about Dijkstra, this time I'm going to look at heuristic or "AI" style approach the A* algorithm. This is a single-source single-goal pathfinding algorithm. In essence this algorithm "guesses" or estimates the distance that remain to get from a node to the destination node. These estimates guide the direction of the path (i.e. search), with each node that is visited updating the true cost of the path, until a solution is found.

A* considers what to do at each node depending on an overall heuristic score. The total score is a function of the cost of the path that has already been traversed (the "g" cost) and the estimated cost of traveling from the node to the destination (the "h" cost). There are many ways to estimate the "h" cost, typically for pathfinding problems the euclidian distance is used, however it is always better to over-estimate the remaining cost (so you will explore more feasible solutions), and so a common measure used is the manhattan distance.

The A* algorithm works on two lists, a "Closed" list of already explored nodes, and an "Open" list of nodes yet-to-be-explored.

In essence the algorithm is:
In Pseudo-Code (from Bryan Stout): A great interactive demonstration program can be found here: http://www.policyalmanac.org/games/aStarTutorial.htm And some source code for A* is available from the GrinningLizard website (The same author as the fantastic tinyXML library!) Keep in mind that waypoint-based AI navigation for games is a very mid-nineties approach, nav-mesh's are certainly the way to go! For an example of issues with waypoint approaches take a look at this video: Your best bet for navmesh research is Mikko Mononen's blog.
Posted by Adrian at 8:09 PM

Amit's page has a great overview of A*:
http://theory.stanford.edu/~amitp/GameProgramming/